Letterkenny is the largest town in County Donegal and one of the fastest growing towns in Europe with a population of approximately 20,000. There are two suggestions as to how Letterkenny got its name; the first suggests it came from Leitir Ceanainn (Ceann-Fhionn), the white/fair-headed hillside. The second, that it came from Leitir Ceanainn, i.e. the Hillside of the O' Cannons, whose stronghold in the medieval period was based on Conwal, about one mile outside Letterkenny.
The O'Cannons where the last of the ancient Chieftains of Tir Conaill (Tir Connaill is the Kingdom now known as Co. Donegal). Although the O' Cannons were the last of the Ancient Chieftains of Tir Conaill there's no evidence or forts belonging to the clan exists in or around the Letterkenny District. Rory O' Cannon, the last Chieftain of the O' Cannon clan was killed in 1248 by Godfrey O'Donnell. The O' Cannons, O' Donnells and O' Neills fought numerous wars for supremacy.
During the Plantation of Ulster in the 17th Century, a Scottish Captain called Patrick Crawford was granted a 1,000 acres by the British Monarchy. After he was killed in Scotland, his widow married Sir George Maybury, who built a plantation house beside Lough Swilly. He also constructed a market town called Letterkenny. This had fifty thatched houses. A bridge was built over the river Swilly at Oldtown and many of the native Irish families settled there. The Civil Survey of 1657, describes Letterkenny as a town with a market every Friday and two annual fairs.
The town prospered during the 17th Century. Plantation houses were built including those at Rockhill, Ballymacool, Magherennan and Ballyraine. During the 18th Century, industry continued to develop including the port and the mills.
Letterkenny has developed over the centuries from a tiny hamlet into the largest industrial and commercial centre in the Country.

Up until the 1950's Hiring Fairs were held twice-yearly in Letterkenny when adults and children as young as 8 or 9 would gather in the town to be hired out as manual labourers and servants, for periods of up to six months, to the farmers of Lagan Valley. These "Rabble Days" were held annually in May and November.

In 1837, Lord Southwell built a row of red-bricked buildings overlooking the Market Square. An ancient castle was said to have stood to the south of the Southwell place. Up to the middle of the 19th Century a piece of ground there was known as the 'Castle Garden', this is probably where the name Castle Street derived from.

The building which now houses the Bank of Ireland across from the Market Square was built by the Hibernian Bank in 1874. The design is by Timothy Hevey and has been described as "local rogue architecture", aggressively ornate Gothic with attached columns, polished granite, red sandstone trim and square blue rubble walls.

The Building which today houses the Donegal County Museum has had a long and varied history. In July 1841 the Letterkenny Board of Guardian decided to build a Workhouse in the town. Building began in 1843. The Workhouse opened in 1845 shortly before the Great Famine to admit 46 paupers. The Workhouse continued in use until 1922. The building then became a fever hospital until 1945, a maternity unit until 1960, the town council offices, the Registrar of Births, Deaths and Marriages and a Library before becoming the County Museum in 1987.

Under the Lunacy Act 1880, local authorities had a legal obligation to care for the mentally ill. In February 1860 the local authority decided to build a hospital in Letterkenny to accommodate 300 patients. The building was completed in early 1866 at a cost of approximately £37,000. A farm was purchased about 1906. At that time the patients were required to do all the farm work. To meet the need for further accommodation, various other buildings and extensions were added. The hospital's chapel was built in the 1930's. From 1985 no further patients were admitted to the psychiatric hospitals in the North West. Today the building houses dental clinics, physiotherapy units and mental health facilities. The office of the Births, Deaths and Marriages Registrar is also located on the hospital grounds.

Work began on Saint Eunan's and Colmcille Catholic Cathedral in 1890. It was designed by William Hague an Architect from Dublin. It was built of white stone from Mountcharles and cost £300,000 punts. The ceilings are the work of Amici of Rome, while the wonderful stained glass windows which illuminate the Sanctuary and the Lady Chapel are by the Mayer firm of Munich. The carvings show stories from the lives of Saint Eunan and Colmcille. It was dedicated in 1901. Its tallest steeple 212ft.

The Church of Ireland is opposite the Cathedral and dates back to the 17th Century. It is probable that when the ancient church at Conwal fell into ruins the first Church was erected in Letterkenny. In 1733 Canon J.B. Leslie reported that the Church was "slated and one side seated". The Rev. William Spann donated the Chalice and Paten in 1744, which are still in use. An obelisk at the east end of the church is dedicated to the memory of Rev. Dr. John Kinnear a Presbyterian Minister in letterkenny, who was M.P. for Donegal from 1880 to 1885.

Is on the site of earlier Presbyterian Churches declaring the origin of the congregation in 1640.

St. Eunan's College was built between 1904 and 1906. It was designed by the architect Mc Namara and is an interpretation of late French Romanesque and Celtic details. It was originally founded as a boarding school in 1906 and was intended as a minor seminary to prepare students for the Roman Catholic priesthood. A new wing was added in 1953 to facilitate an ever-increasing enrolment of lay students, and a new Church was added in 1950. The present Recreation Hall was built in 1958, and the Science Block in 1968. A new wing, which is called "the New Building" was opened in 1979. In 1992 the boarding wing was closed.

In 1854, Reverand Mother Ball was invited by Bishop Patrick Mc Gettigan to Letterkenny to establish a foundation of the institute of the Blessed Virgin Mary also known as the Loreto order. Enrolements at the school were small at first but soon increased and an extension was built in 1861. Another extension was built in 1939, and further extensions were added over the decades bringing the school to its present standard of accommodation and facilities. The school ceased to be a boarding school in 1978.

The Letterkenny Railway opened in 1883. It was an extension of Londonderry and Buncrana Railway. This was absorbed into Londonderry and Lough Swilly Railway in 1887. The Letterkenny and Burtonport Extension Railway opened on the 3rd of March 1903. The 3ft gauge line was 49.5 miles long.
The 74.5 mile journey from Derry to Burtonport took 4 hours with a 15-minute stop at Letterkenny. The Burtonport Extension was closed in 1940, partly re-opened in 1941, and finally closed in 1947.
The County Donegal Railway had its origins in the Finn Valley Railway, an independent 5ft. 3in gauge line which ran from Strabane to Stranorlar. It opened in September 1863. In 1892 the Finn Valley and West Donegal Railways joined and became known as the Donegal Railway. In 1906 the Donegal Railway became pioneers in the use of diesel traction. The first diesel railway was built in 1903. It was the first diesel railcar in either Ireland or Britain.
In Letterkenny the two railways had their own Station with sliding connection on the site of the current Bus Station. They were known to have worked each others lines and during the emergency used each others workshops for repairs. The Letterkenny - Strabane line finally closed on the 31st of December 1959. The company continued to operate road transport and its bus and lorry services passed onto Bus Eireann on the 1st of January 1971.
The Station House Hotel is also built on the grounds of where the Oldtown Station House once stood. It was bought by the Gallagher family in 1953 four years after the last train passed through. It became their home and was lived in up until 2001 at which point is was demolished and developed into a wonderful hotel that boasts 81 spacious bedrooms, each decorated to a very high standard, the Depot bar and Restaurant, and Conference and Banqueting facilities. 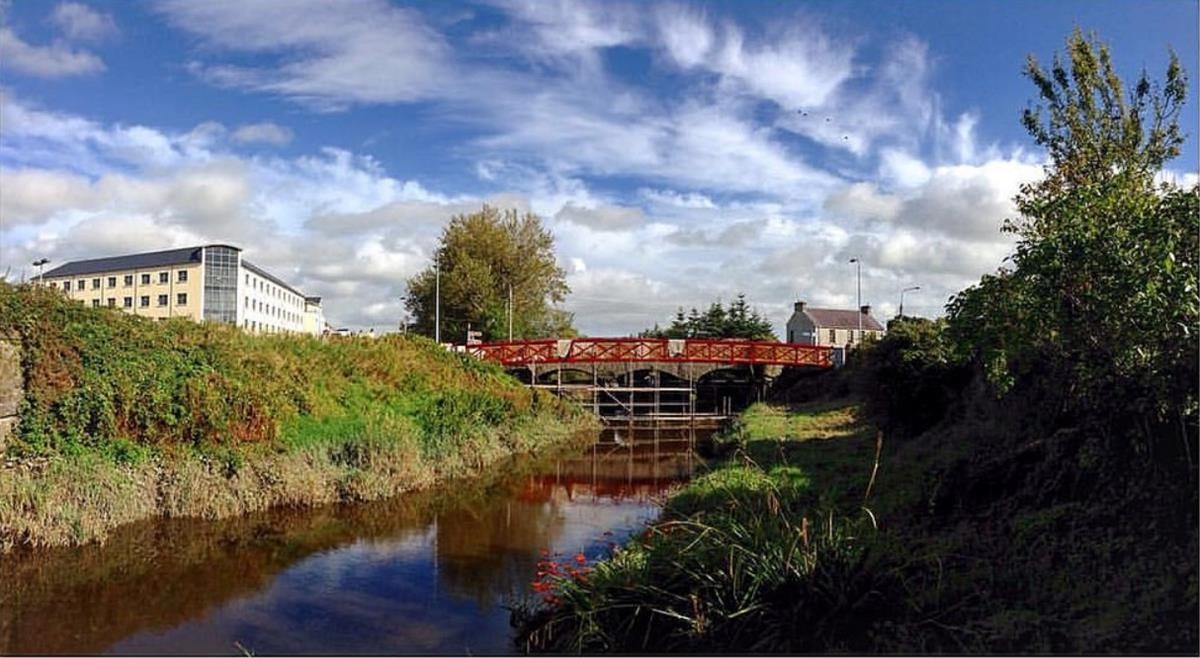 Conwal derives its name from the Irish Cong-Bhaile, which means a habitation, mostly ecclesiastical. It is located west of Letterkenny on the road to Glenties. Conwal was founded by St. Fiachra, who died around 600AD. This ecclesiastical site was first mentioned in the Annals of Ulster for 915AD. The Church stands in ruins today but the graveyard is still in use. One of the finest grave slabs is that of Godfrey O'Donnell dating to 13th Century. Conwal Old Church was described in 1622 as being in ruins. It is 17.5m by 6.5m internally. Fragments of Romanesque stonework and a fine collection of cross slabs survive.

Preference cookies are used to keep track of your preferences, e.g. the language you have chosen for the website. Disabling these cookies means that your preferences won't be remembered on your next visit.

We use analytical cookies to help us understand the process that users go through from visiting our website to booking with us. This helps us make informed business decisions and offer the best possible prices.